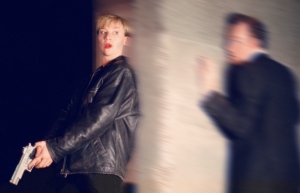 redball MA+ is the freest editing experience I’ve ever had.  The most often phrase I heard from Jon Hewitt (director) was “Surprise me.”  Jon didn’t know me but trusted me and gave me the freedom to try anything. The only rule was ensure the dialogue made sense otherwise cut wherever and when ever.

The drama: the hunt for a child killer reveals corruption in the police force goes deep.  It’s fast and bruising for the most part jump cut pulse action enhanced by Mark Pugh cinematography, the performances and Frank Lipson’s sound design.

I have Alan Woodruff to thank for being involved in this film. I said yes was an opportunity to enhance my working knowledge of Lightworks. When we went into post it became clear that the one shot scenes Jon had initially discussed were now multiple takes on a hand held camera. That creative decision increased the workload and elevated me to co-editor.

In 1996 redball was the first digital film in Australia. Having originated on minidv it forced the Australian Film Institute (now AACTA) to change its ruling on Feature film format so if a feature originated on another format other than film it could be nominated if it was finished on film. redball did.