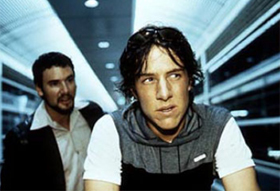 Sparky D Comes to Town is an multi award winning television half hour episode for the successful SBS Hybrid series. It was three and half weeks edit where 15 hours of mini dv material became a rapid cut 25 minutes.

Stretch is having a night from hell. All he wants to do is go to see Sparky D with his girlfriend but his parents and needy friends have other ideas.

Music is a large component of this drama so the composer was involved very early on. It was a fantastic organic experience where the picture informed music, music shaped the next edit, music responded and became more nuanced and so on.